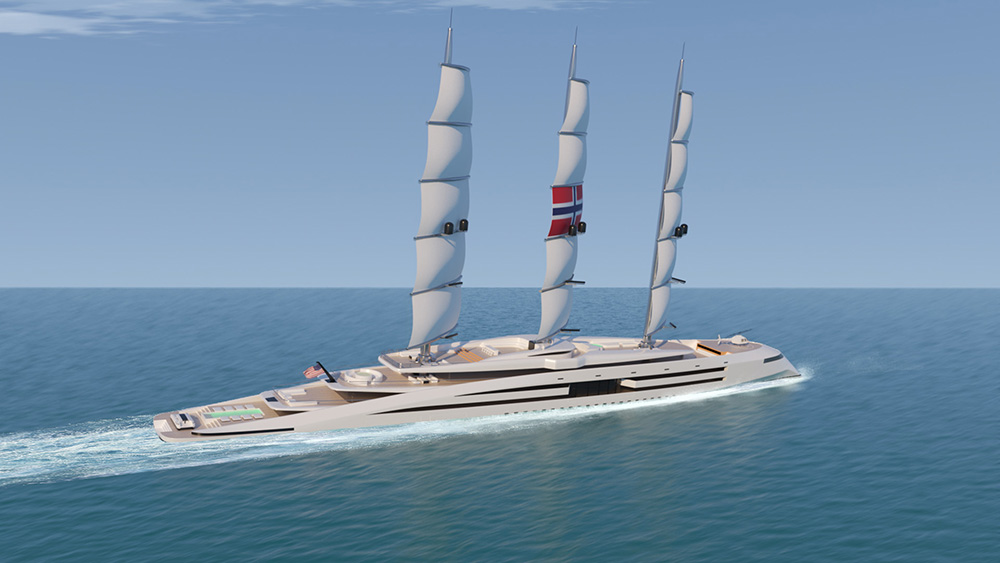 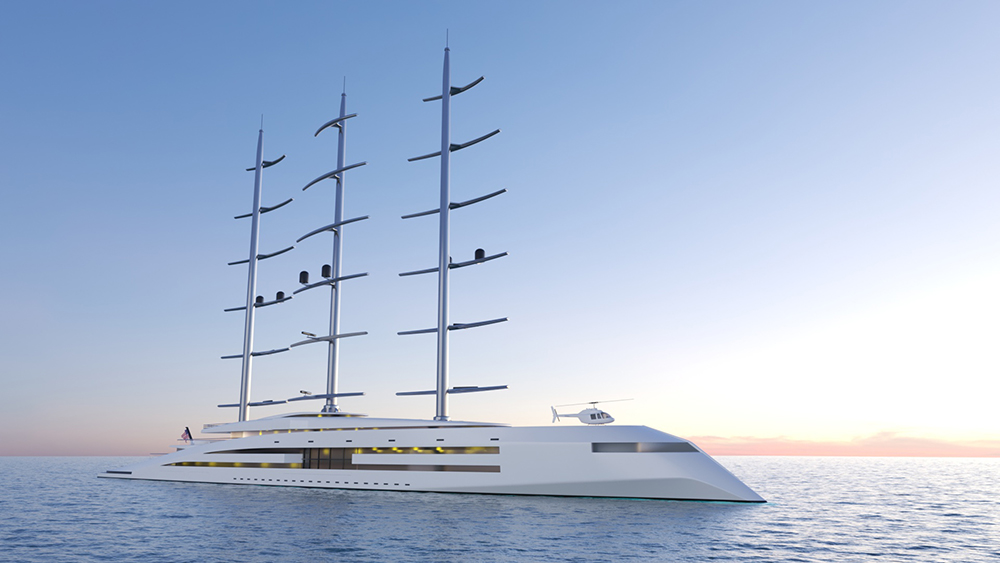 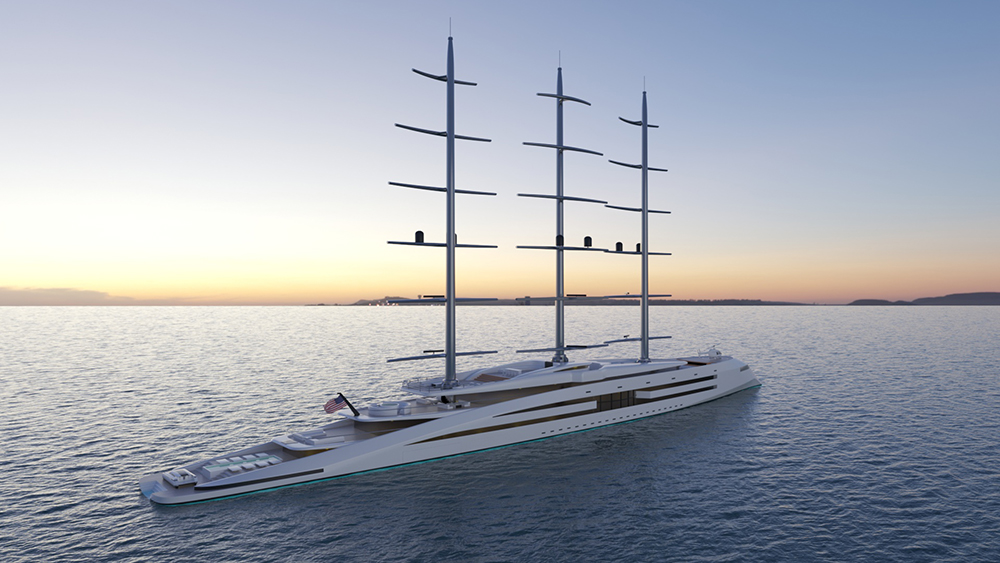 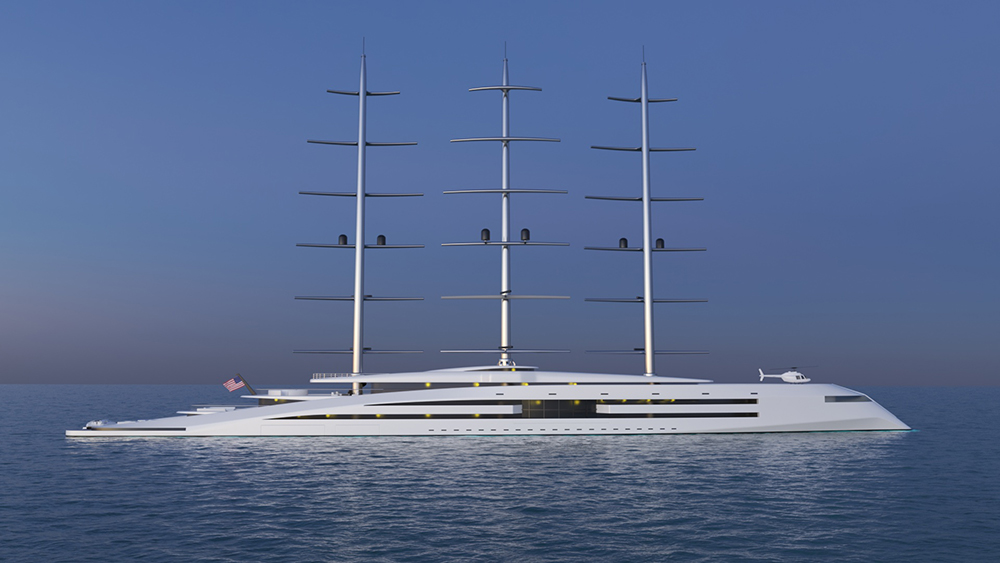 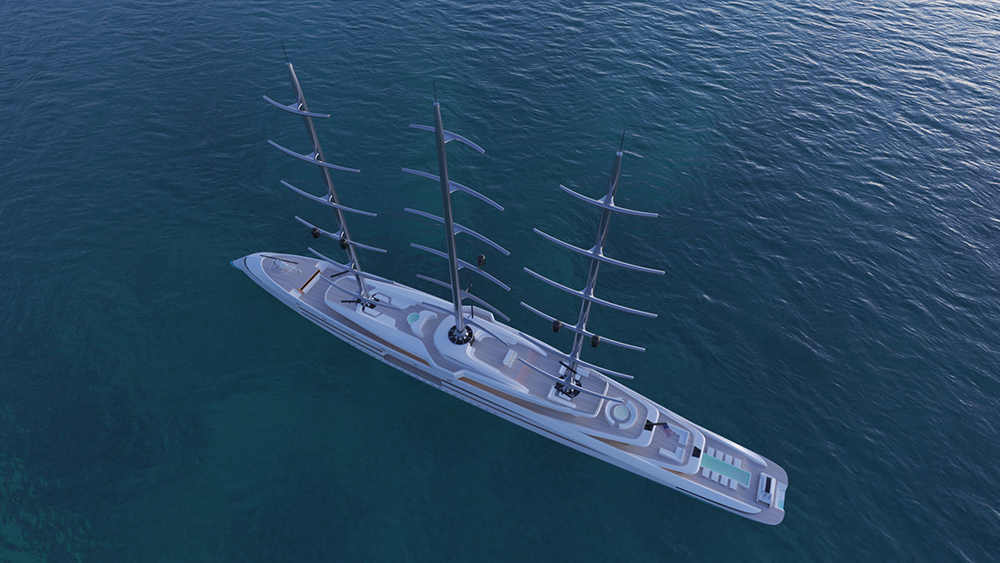 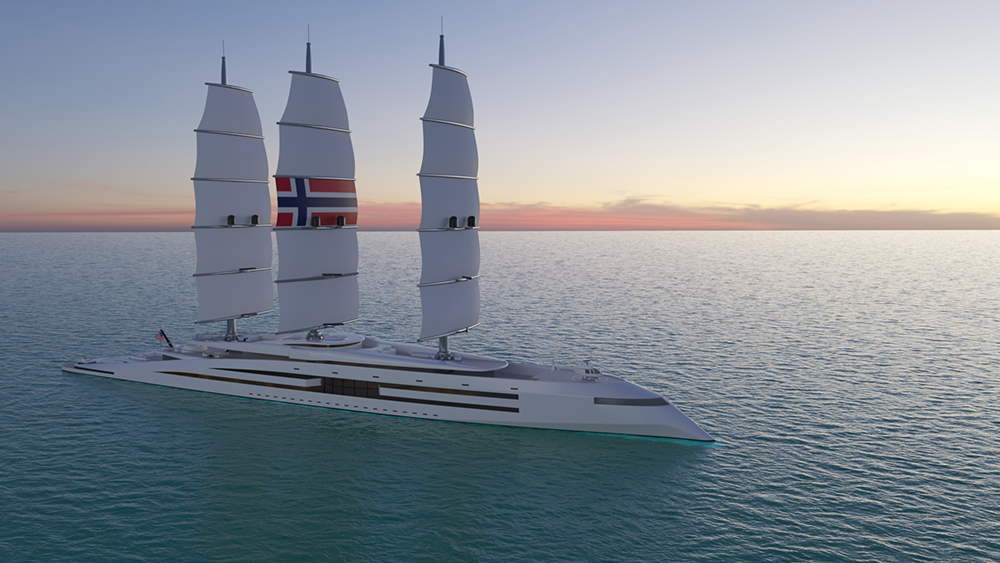 Norwegian designer Kurt Strand is going back to his roots with his newest sailing superyacht concept.

The hulking new 528-footer, aptly christened Norway, was inspired by ye olde flat-bottomed longships of the Viking Age. Strand has always been impressed by the beauty of these vessels and their powerful square sails, so he decided to reimagine one for the present day. As such, Norway is equipped with “space-age technology” that will allow her to sail to all corners of the globe sans emissions.

The sleek superyacht is crowned by three electro-hydraulic carbon-fiber rig masts that each stretch 315 feet and rotate as needed. The masts collectively support just shy of 65,000 square feet of sails that are covered in a flexible solar cell foil to capture the sun’s rays. According to Strand, the nifty push-button setup enables all sails to be deployed or furled away in just six minutes. It also requires far less crew than a conventionally rigged yacht.

Norways sails can be deployed or furled away in just six minutes.  Kurt Strand Design

While cruising, any energy captured from the sails is stored in a battery bank onboard and can also be used to produce hydrogen. This means when there’s no wind or sunshine, Norway will instead be powered by three multi-fuel generator engines that can run on either diesel, liquified natural gas or hydrogen. Strand says in ideal weather conditions, the superyacht will produce more clean energy than it uses.

Norway promises smooth sailing, too. The vessel will be fitted with a unique sail handling system for precise maneuvering, as well as two side-by-side retractable keels with stabilizers that allow her to navigate shallow waters.

See also  The Forgotten Temples of the Online Slots

As for accommodation, Norway can sleep up to 24 guests across 12 lavish suites, along with 40 crew. And, unlike the Middle Ages, all Norseman aboard will be kept in the lap of luxury. At the center is a circular two-story lobby and bar that offers undisturbed views across the vessel. From here, seafarers will have access to a fitness center, spa, beach club, swimming pool, cinema, supercar garage and even a hospital.

When there’s no sun or wind, Norway can run on diesel, liquified natural gas or hydrogen.  Kurt Strand Design

The real pièce de résistance, though, is the “sky elevator” in the middle mast. Strand claims it delivers incredible ocean vistas some 340 feet above water level and is the perfect place for sundowners.

Naturally, Norway also packs all the requisite toys. There’s a helipad on the foredeck with an elevator to a hangar below, plus a garage to store tenders, off-roaders, Jet Skis and more.

It’s not the first futuristic sailing superyacht Strand has penned, either. Earlier this year, the Norwegian’s eponymous studio unveiled a 525-footer called Florida, which was a floating love letter to the southeasternmost state.

One thing’s for sure, Strand is certainly not short on creativity.