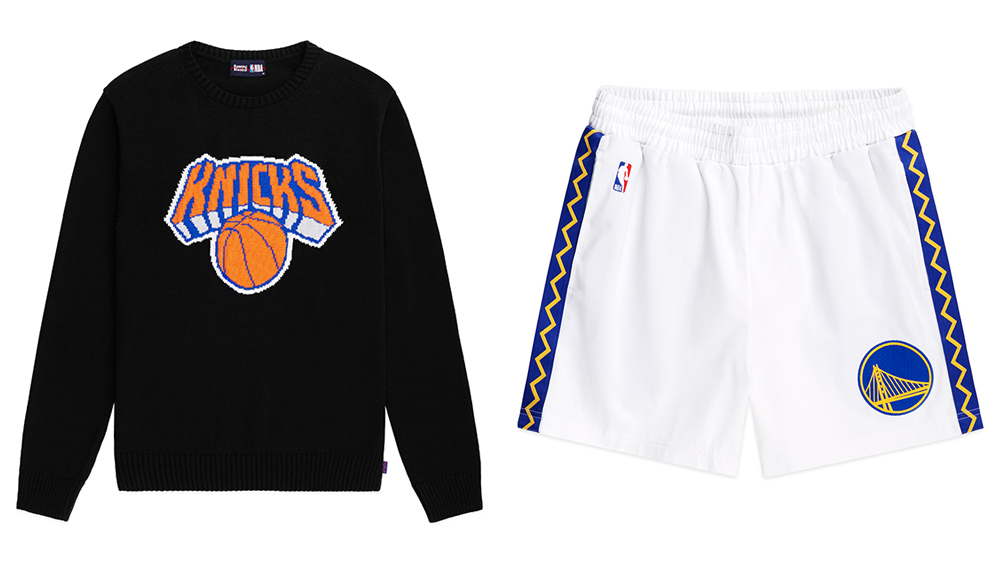 Hot on the heels of last month’s start of the NBA’s 2021-2022 basketball season, the league has introduced a new capsule collection with Rowing Blazers that gives fans a sporty range of selects to wear court and couch side.

On Thursday, the companies launched their second line of limited-edition collaborative styles. The unisex collection features the logos of six teams printed on sweaters, trousers, striped rugby shirts, basketball shorts and hats—all in team colors. Fans of the Boston Celtics, Brooklyn Nets, Chicago Bulls, Golden State Warriors, Los Angeles Lakers and New York Knicks can shop multiple items per team from the drop. The league’s signature logo is also featured in the collection to designate its status as official merch.

Some standout pieces from the launch include soft cotton intarsia sweaters and extra-soft wide-wale black corduroy trousers with all-over NBA team embroidery. There are also heavyweight rugby jerseys with oversized, satin-stitch embroidered team logos, as well as cotton twill shorts that feature Rowing Blazers’s signature zig-zag side stripe. As for accessories, the “dad hats” were created in collaboration with Boston hat company ’47, and feature league and team logos hand-embroidered in gold bullion wire.

“Our first NBA collaboration was so much fun, and it’s an honor to be working with the league again,” Jack Carlson, founder and CEO of Rowing Blazers, says in a statement. “This capsule is all about mixing some old school ‘preppy’ codes with some of the league’s most iconic logos.” The duo’s first capsule, released in February of this year, offered casual and formal wear selections like blazers, cardigans and ties. It also referenced the same six teams seen in the new drop, and was heavily inspired by collegiate uniforms from the ’60s to ’90s, according to Hypebeast.

“This time around, I wanted to do rugbies in team colors—and then, naturally, rugby shorts to go with them,” says Carlson. “All of the apparel is handmade in Europe using all-natural fibers. The rugbies are all knitted using a very special technique that makes them super high-tension and luxurious, and the embroideries are all dimensional and textured. The rugby shorts have our trademark zig-zag taping down the sides, but in team colors. And the sweaters are just insane. The Bulls sweater is my favorite.”

If you’re in the market for new apparel to rep one of these six teams this season, you can shop the collection now; prices range from $63 to $295. Head over to RowingBlazers.com to make your purchase—and show your team spirit—before the next game.